Since last week its snowed heavily. Logic dictated we should therefore
go out on the bikes again. 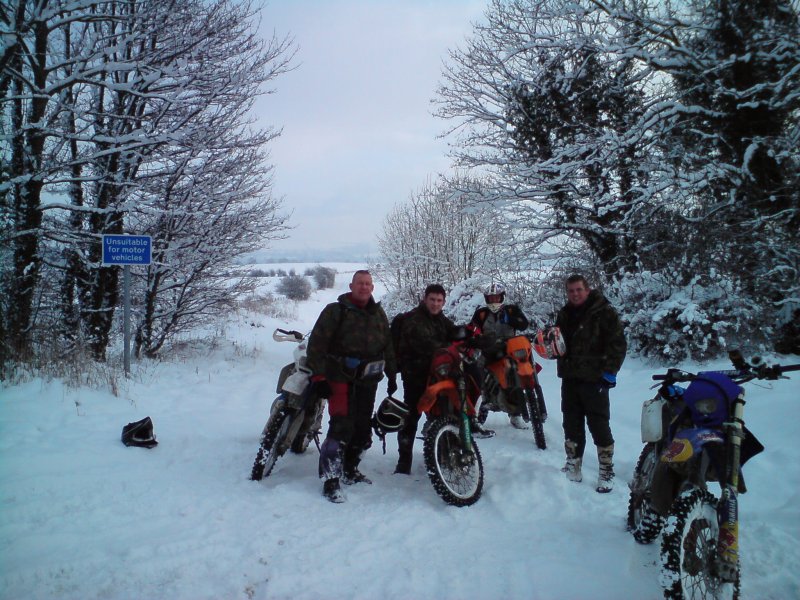 As last time, the camera phone did well and there are pictures on flickr.

This time I decided to ride from home to the meeting/starting point which is 20 miles of tarmac. This turned out to be fine and I arrived on time for the meetup. The bike coped with the icy roads very well.

Eventually we set off being four in number at this point. We followed the same route as last weekend off up a trail that climbs the hillside. One of us, a relatively new TRF member struggled a lot on this section with him and his bike overheating and being difficult to start and it having no traction. It being 525cc and a MX bike variant by no means helped. I ended up going on ahead to tell the others what was going on, we U turned and took him back down. We then tried a simpler lane but he kept stalling due to the cold and in the end he decided to head home as he wasn’t enjoying it. A good call as if he struggled then, he’d have hated the rest of the day.

We continued on ending up at another residence and picking up two more riders, then we were five.

Upon departing Stocksfield on approach to a paved ford someone binned it due to ice on the road and nearly got soaked. He seemed to be enjoying himself though. Riding on a little further Steve pointed down a lane and suggested I go on ahead. Nobody overtook me which was unusual and I arrived at the next tarmac junction and waited. And waited. Eventually they turned up, apparently someone had to push his bike up some hill as there wasn’t enough traction to ride it. I must have rode up it but it didn’t register and I have no recollection of it. This was when the group photo was taken.

Moving onwards we now needed to cross a field thick with untouched snow. I had my doubts about it but as always, if someone can show me its possible, I’ll try. I found bringing up the rear at this point quite tricky as it meant following some elses deep rut in the snow. Creating them is hard on the bike, following them is hard on the rider as you end up bouncing foot to foot. In this case the back wheel did lots of spinning and the bike didn’t do much moving forwards. The bike temperature warning light came on, it made suitable hissing noises and generally was not happy. I let it cool off.

Things didn’t seem to be working as everyone was making much better progress than me through this field. Why? Good question. I stopped and let some air out the rear tyre in case it would give me some better traction. It might have marginally but this was not the problem. I’d been trying smooth engine revs, I tried pulsing throttle as an experiment. This is something I need to play with more and no doubt has its uses but didn’t do much here. I suddenly realised I was never leaving 1st gear. Trying to get some (any) speed up, and balance the bike long enough to change gear whilst riding along a twisted rut in deep snow isn’t as easy as it sounds but it didn’t half make a difference in this case. I’ve hence learnt a new way to torture the bike. Pulling away in higher gears actually worked reasonably well too.

Ahead, the others had been having fun whilst having a break with Nick demonstrating how to run in an engine. The fountains of snow were impressive, especially as he seemed the most nervous on the icy roads.

We moved onto Slaley forest itself. The first part of the route we’d taken last time where I got stuck in the bog wasn’t accessible as the gate was frozen into ice several inches thick so we bypassed that bit and onto the forest proper. I was at the back so I stopped and watched, making a note of where people were getting stuck. I then made sure I had more momentum and less mechanical sympathy for those bits :).

The bike continued to get hot and require rests which was fine with the rider. This whole section was badly rutted, you never knew what you were going to hit under the snow and hence feet down bouncing from foot to foot to keep it upright was order of the day. This zaps energy and tortures muscles, the strain was showing on us all at the back, two of whom are a bit older than me. After various breaks, they were struggling and it got to the point where it was hard work following them so I overtook. It also meant the rut I was following wasn’t as churned up.

I was pleased that I did manage to find bits where I could start to keep my feet on the pegs around this time too.

We’d covered no where near the distance we had last weekend but time was getting on and everyone’s energy was expended so we decided to head homeward. Lots of icy tarmac country backroads followed but the bike behaved itself well. In the forest the wheels had filled the spokes area with snow and every now and again bits would break off, fire out the mudguard into the air and hit the rider. This left the wheel unbalanced and at one point it was actually oscillating the front suspension which was a weird feeling.

With only a few miles back to the start point I noticed a whirring from the front end. Handling and brakes seemed unaffected so I assumed it was the current road surface. The bike then stuttered and died, distracting me to the more urgent lack of fuel. Switching it to reserve dealt with that but I didn’t want to lose the others so pressed on, thinking the noise was in my mind. The others returned home, I headed off to the village fuel station where I noticed the front tyre was now totally flat. I rode it up to Steve and tried to pump it up which failed. From here it was 20 miles of tarmac through the centre of Newcastle to get home. I therefore wimped out and summoned a van. I could have attempted to fix it but in the freezing cold it wouldn’t have been fun.

It was all good fun, albeit very hard work at times and very draining on energy. I’ve learnt some new stuff about riding on snow and ice, its amazing whats possible.

I was surprised to realise that I never fell off which has to be a record. Also, I only ever had to get off the bike once to resolve an issue (to shove the front end down a hole to join the rear in a different rut). Makes a change!