On Thursday night I set off for a field in Hexham, arrived and set up camp. A pleasant evening was had around a couple of campfires.

Friday was marking out day. This was a repeat of the previous Saturday before but with marker tape for the junctions and checkpoint signs. Wark forest was straightforward and we met the forestry commission representative who was very friendly. Kershop forest already had markings in red/white so we had to switch to yellow/black which was hard to see. We made it back to the vans and then the campsite without incident. 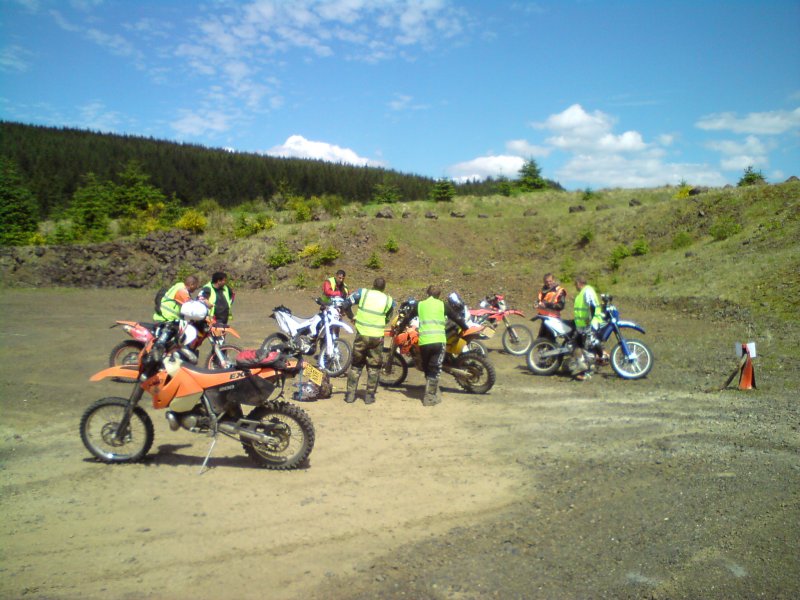 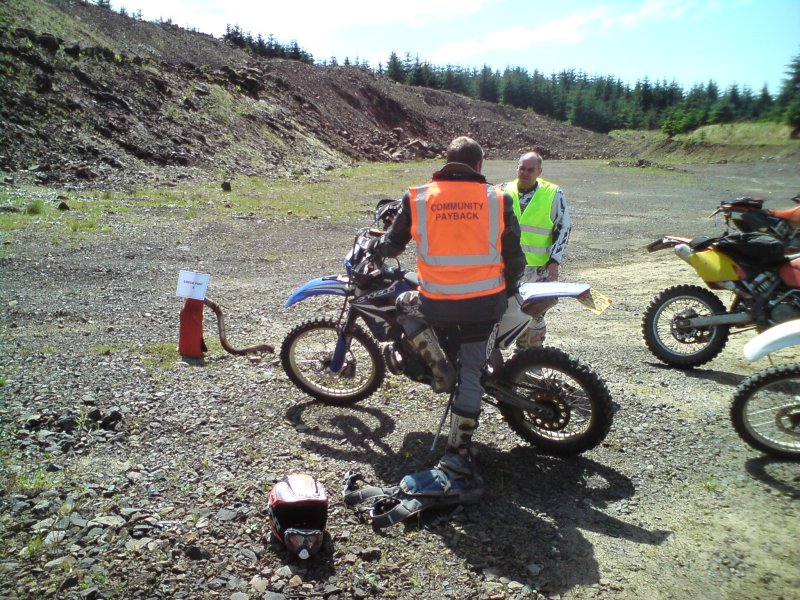 The bike was starting much more easily, had more compression and more power. Several people commented it appeared to be running better.

Another pleasant evening was had around the campfires with bike footage playing on the big screen and bbq’d food, watching various people arrive and set up camp.

Saturday morning arrived, the refueling station left at 6:15am and the first group (A) was due out at 8:15am. As with the best laid plans, they started to go wrong. The run leader did not show up. His KTM had a locked up front brake calliper apparently so he was stranded and unable to make it. End result was that A group was dispatched with C’s leader.

It was decided I was our best chance at leading group C of 10 bikes. As for a route, I’m still hopeless at both finding trails and joining them together but I did have the route from last year in the GPS so I could potentially do something which wasn’t all tarmac. My GPS needs its backlight to be readable and the external power is broken as the connector on the device is bust. I had it on the bike with no backlight purely to track where we were, not to navigate off. 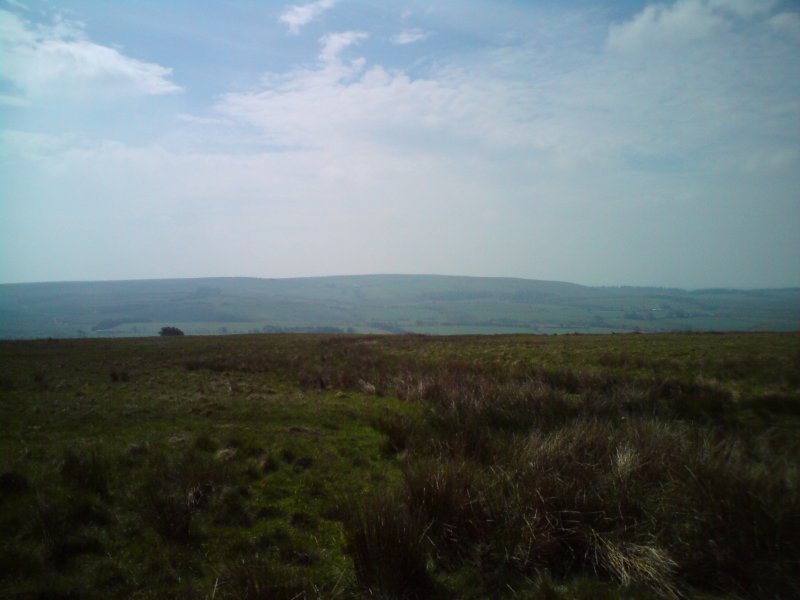 Regardless, we added a tail gunner I knew/trusted and off we went. We found our way to the first checkpoint with everyone present having made the required fuel stop and only one U turn as I was looking for the wrong gate and couldn’t see the GPS due to the sun so an improvement on last year.

At this point we were joined by the two from the refueling van having ridden in from the other direction so I was back to group E, cleanup detail. We were following, removing tape, locking gates and so on. It was dry and hot and very dusty so being there wasn’t actually a bad thing. 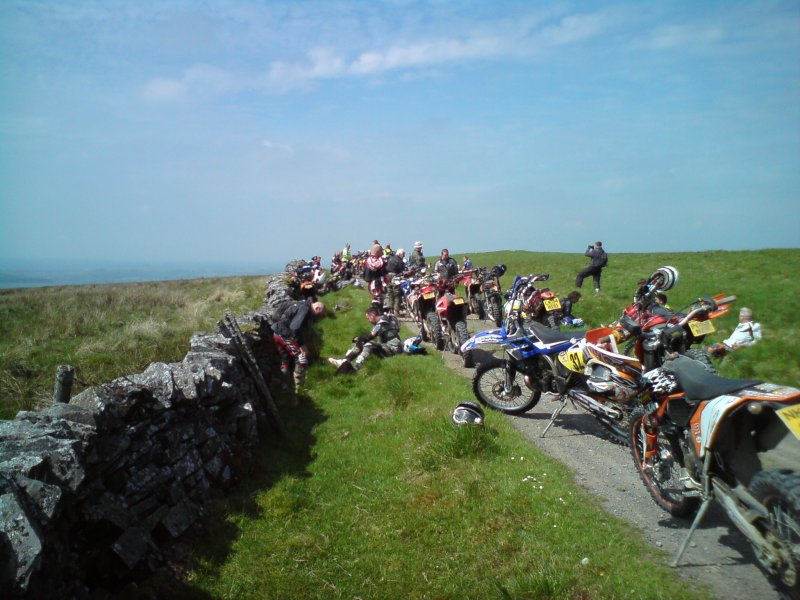 The group at one of the checkpoints

We got through Wark forest being led by Steve and arrived at Kershop. At this point I took over leading E group as Steve needed to sort out the refueling site and would catch up. We got a short distance into the forest only for me to get called back as we’d had our first mechanical of the day, in the cleanup group of all places. Investigation showed a front sprocket with no teeth left. After some discussion, we tightened up the chain, advised gentle use of the throttle and continued on collecting up the marking tape.

We arrived at the refueling site as planned and Steve never had caught us up. Everyone had arrived there except one bike from D group. Bikes and people were refueled and the broken bike was put into the van. Steve arrived and had only found one tape we’d missed. He went off in search of the missing bike, the rest of the group proceeded with the plan with E group once again doing demarking and being led by me since I knew the route. 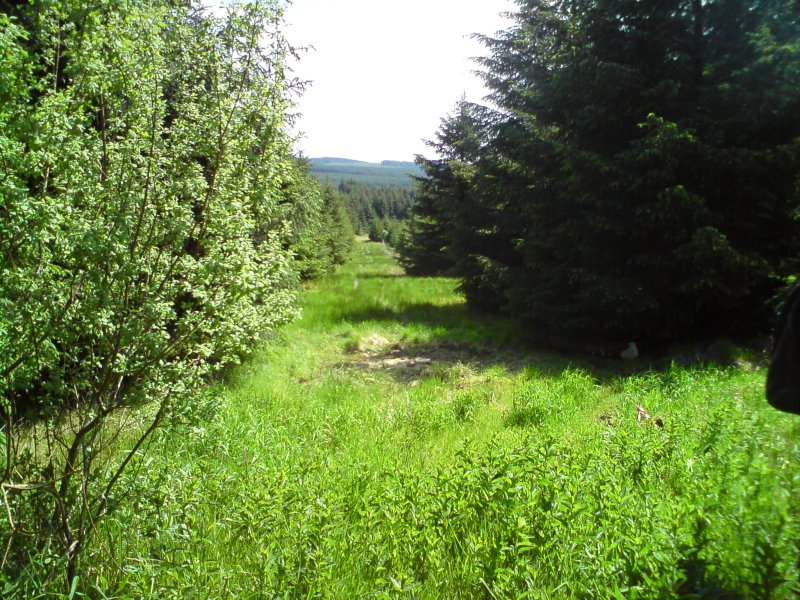 A nice grassy decent. Would have been very different if it had rained!

We made good progress and came to the final forest checkpoint. The other bike was still missing. It was agreed that I’d take the remainder of E group back through Wark locking gates and Steve and Nic would stay behind on search duty.

We set off only to find D3 parked up next to a house asking about obtaining some fuel. Someone was dispatched to cancel the search and regroup so Steve and Nic rejoined us and as a group we headed off towards Wark forest. As we neared it, we caught up with the main group. We found B1 which wouldn’t start on the button and no kickstart. We bumped it down the hill towards the ford and I’m just pleased it started as otherwise he’d have got wet! 🙂

On the way back through Wark, we found mudguard and numberplate that had gone missing on the way up from one of the group’s bikes. Just before we arrived at the original checkpoint exiting Wark I had my closest near miss of the day as I went into a corner too fast and had the front wheel sliding all over with me flailing around too. Somehow I managed not to fall off.

My original plan for a route back had been Simonburn “proper” as I could find the start of that, then the route I’d used to get there reversed up Chollerford steps. Since Steve/Nic were there they led over the other Simonburn route. There are pictures of bits of that route in previous blog posts. I have never seen the ground so hard and the fords so low with water. After Simonburn, fuel and Steve+Nic were not interested in more trails but the others were so I took over the group from there and led them up the steps and back to the campsite. We were the first group back after Steve+Nic.

Another evening of banter, campfires, BBQs or takeaways, bike footage on the big screen and so forth went ahead at full steam. Some of my raffle numbers even came up!

Sunday morning came around all too quickly and I was undecided about going out but decided since the bike and gear were there and already filthy it would be rude not to.

Nick ended up leading a group of five of us to Hamsterly forest and back. The three other members of the group were two locals who’d just got off road bikes (one wearing jeans?) and a 70 year old from Norfolk (Dave). If I can do what he does at his age I will be happy :). I played tail gunner for the day.

The trip was good fun with a comparatively relaxed pace. We had to pull the bike off Dave a couple of times but he seemed to be enjoying it :). We passed a convoy of 4x4s who were having fun getting vehicles stuck. Personally comparing the capabilities of the bikes to them, I’ve an infinite preference for the bike. There was at least one maneuver I was lucky to get away with and some others where I was able to intentionally bounce the bike around in ways I’ve never had the nerve to before. The bike did fall over once, off the side stand as I was parking it.

The run ended with ever heavier rain and then I lost the group as nobody was marking a turn they’d taken. I was close to the campsite and thought they must have headed back so went there to find they weren’t. A quick phone call (phones work around there!) called off the search for me and they arrived back shortly thereafter along with many of the other groups who’d been out.

I packed up in the rain and headed home, unloaded the van and collapsed, exhausted having an early night. I’ve never managed two days riding before, let alone three so this is a new record. The bike behaved and everyone seemed to enjoy it. My thanks go to everyone who helped with the weekend.